Quick! Our Samba band is doing a special Halloween gig TOMORROW and our band leader says the theme is gonna be “Day Of The Dead”*. Looks like I have to cook up a costume real soon.

While I can work out the details with the face paint and hat and other possible hand held items which will be determined on the day of the gig, I should at least appear “skeletal” in some sort of expressive way and have it ready at least a day ahead of the gig. It appears that I have some black clothing; a long sleeve turtle-neck shirt and black capoeira pants. I don’t want to ruin the shirt or pants, so the idea occurs to me that I can create “bones” on the cloth using white tape. In this case I have some of the “Duck” band tape, coloured white. 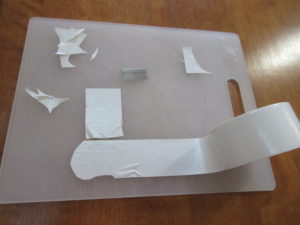 Apply some tape to the cutting board and with a sharp knife cut out a simple “bone” shape. You might want to measure the length of the leg and arm bones so they are a little symmetrical and using your best memory of what a human skeleton looks like, cut out some bone-like shapes from the tape. (Don’t look at a diagram or model of an actual skeleton while you cut; this is an art form, not an anatomical display!)

When you have a bone cut out, carefully pull it off the cutting board and apply it to the cloth. It’s best to spread the shirt and pants on the floor so you can better judge where the hip bone connects to the leg bone or whatever. 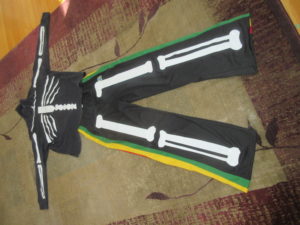 Shirt and pants with bones applied

Sure, the ribs are funny and the leg bones are way too big. That’s OK. This is for a gig that might go on for about two hours. Sure, the bones may fall off, but that could be funny too.

This little project took about 30 minutes to complete. One other thing I think it might need is skeletal hands. If I made hand bones out of tape, they would probably fall off a gloved hand, especially since I’m using my hands to play drums in a samba band. Lucky for me I had an old pair of dark coloured cloth work gloves and some white paint. Using a small paint brush, you can easily paint “bones” on each glove: 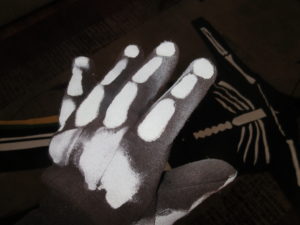 OK, it’s not great, but it’s good enough “for today”, and I’m in a hurry so I’m sticking with this design.

Now, if you have time this Friday, November 28, 2016 get on over to Oak Street Plaza in Fort Collins at 8:00PM and see Fort Collins’ Samba band BLOCO EM FOCO for a special Halloween performance!

*Check out this blog from October, 2014 for another costume idea.