One of our newer pieces of equipment at the Fort Collins Creator Hub is a Vinyl Cutter. It’s like a big computer controlled plotter except instead of using a pen to draw a picture there is a sharp knife blade that can cut paper or vinyl designs. Mostly these cutters are used for making signs directly from the vinyl material but in this case I’m using a vinyl cut design as a stencil for a DIY silk screen project. 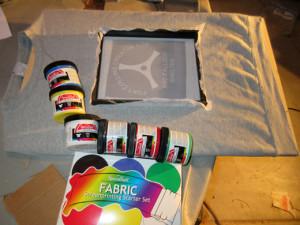 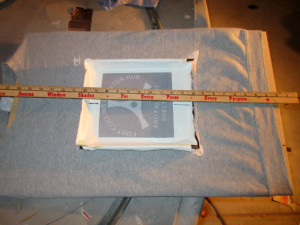 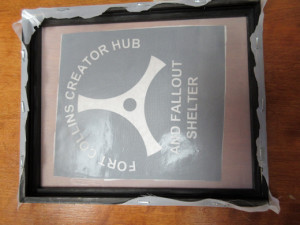 I made a small 9×7 inch screen from an old picture frame and some sheer curtain material that I purchased from the local Goodwill store. Total cost was $2.37 with senior discount. The design as shown was cut as a mirror image because the stencil is going to be attached to the outside of the screen or the part of the screen that will be in contact with the fabric. The vinyl was weeded out (i.e., the sections of vinyl that the ink would pass through was carefully removed) and the minor adhesive backing was applied.

Some of the prints came out OK– Some other shirts were used in horrendous experiments that were too awful to show, but I think I got it, so maybe some screen printed shirts in the future? Maybe? Anyhow, I left some “rejects” on the front table of the HUB that can be yours for FREE if you act now!