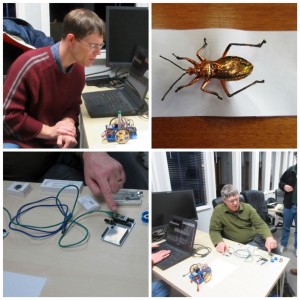 At our last meeting our ‘show and tell’ introduced a number of neat little projects.  Among them was a little robot that can draw fancy designs on paper. The robot  used what is called ‘Turtle Graphics’  and  so therefore the robot itself could be  called a turtle.  To top it off, the turtle used the groovy ESP8266 Wireless transceiver module to communicate with a laptop. (See Stephen’s post about the LOGO Turtle).

There was also a ‘Gold Bug’ pin created by plating copper metal onto a genuine (at one time alive) assassin bug; Apparently there are people who like this kind of jewelry. Who knew?